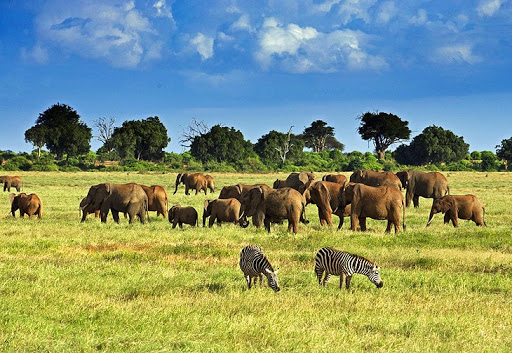 The two national parks are all dominated by the same habitats with little difference. The Tsavo West is wetter and rocky than Tsavo East which is mostly dominated by the open savannah grassland. The park is a single destination that traveller can get his or her African wildlife safari to come true. It’s a dream destination for travellers who may not have much time since they are busy.

Tsavo national park Kenya is located in the Coastal province in the South Eastern part of Kenya bordering the Indian Ocean as well as Tanzania. The park is found at the semi-arid part of Kenya. The semi-arid area was formally called the Taru Desert before it was gazetted as national park. The park is located near the town of Voi town in Taita-Taveta County. Taita-taveta County was the former province of the Coast.

The park is bordered by mkomazi Game reserve of Tanzania and Chyulu hills national park. The park borders the best community Conservancies of Kenya like: the Taita Hills Game Sanctuary and Lumo Community Wildlife Sanctuary. Tsavo national park is one of the best wildlife game reserve that can be easily enjoyed by the travellers. The location of the park makes it rich with wildlife that can be viewed throughout the year.

Tsavo national park is one of the few national parks that can be easily accessed by both road, railways and flights. The park can be accessed from Nairobi or Mombasa. If in Nairobi donot worry it takes only 6 to 7 hours drive using the Nairobi-Mombasa highway. The construction of the highway has made it easy for the travellers to access the park by both public means and private means. There are very many bus companies that operate daily from Nairobi to Mombasa through the park. You will be dropped just at the gate entry where you can now enter to the park. You can alternatively use the public railway that operates daily from the capital Nairobi to Mombasa. The park is among the few national parks in Africa which can be easily accessed by the cheapest mode of transport called railway. The railway is a unique means that passes through different villages hence giving you true experience of Kenyan rural life.  Depending on where the traveller will be starting his or her safari from within the Kenyan boundaries. The park has different gates that are distributed across all the sectors of the park. The different gates of the park include Chyulu gate, Voi gate, Mtito Gate, Manyani gate, Buchuma gate, Sala gate, Man Eaters gate and many more.

Another alternative of access Tsavo national park Kenya is by flight. There are several daily chattered flights that can be used. The domestic flights depart from Wilson airport in Nairobi, Mombasa airport and other domestic airstrips.  The park has more airstrips that are distributed both in Tsavo East national park and Tsavo West national park. The airstrips include: Satao Airstrip, Tsavo Gate airstrip, Jipe airstrip, Bachuma airstrip, Mopo Airstrip, Kamboyo airstrip, Kasigau airstrip mention but a few. Some of the airstrips are located inside the park while some are found just few kilometres a way from the park but near the park gates. All the domestic chattered flights can be booked by traveller or use local tour operator who would give you all inclusive Tsavo national park flight safari.

Tsavo national park Kenya has good climatic conditions that makes it possible for the travellers to do game viewing and other safaris throughout the year. The park has permanent residents that can be viewed any time during the morning or evening game drives. You only need to use reputable tour operators that gives you the good parking lists that rimes with the time of your visit. The park is rich of wildlife especially the African big five those are Lions, Leopards, Buffaloes, Elephants and rare black and white Rhinos. Other big game found at the park include: Giraffes, Kobs, Gazelles, Zebras, Hyenas, Cheetahs, jackals, African wild dogs and many more. Game drives are best done during the dry \season when the grass is short and the animals are easily located in water catchment areas. However you can also do remarkable game drives during the rainy season though using 4wheel drive cars only due to the poor muddy soils at the park. Tsavo national park Kenya is a home of over 400 bird species that birders can enjoy. The long list of birds are achieved with long Tsavo national park safaris. You have to have a minimum of 3 days birding safari for excellent birding trips. You will have chance to see both water birds, forest birds and savannah birds. The birds include secretary bird, lovebirds, Starlings, Little Egret, cattle egret, different species of Francolin, Different species of Eagles mention but a few. Unlike game viewing, birding is best done during their breeding season which occurs in rainy season. This is the time when the migratory birds come to the park.

Tsavo national park Kenya remains one of the best protected areas in Kenya that gives you unique experience of both game viewing safaris and beaches. Its near to the coast makes it easy to be accessed when in Mombasa.