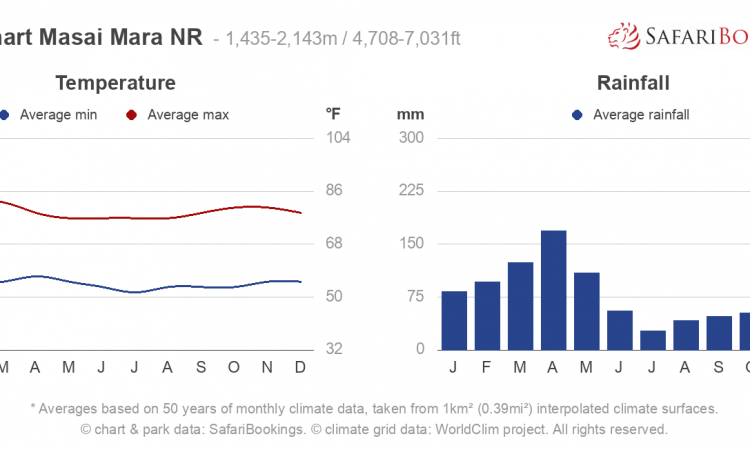 Weather & Climate Masai mara : Masai Mara national reserve is one of the most famous wildlife destinations on the global famed for the Great Wildebeest Migration the greatest movement of wildlife ever witnessed on earth.

Masai Mara national reserve is a great destination to visit all year round, weather in sunshine or rain it will never be in vain to pay a visit to this glorious wildlife destination.

As a tourist, before packing it advised to take a look at what you can expect as far as weather and climate in the great Masai Mara national reserve.

Masai Mara national reserve’s rainy season or wet season begins in November and goes up to May, however there are a couple of dry months in January and February. Days in the wet/rainy season are often overcast with showers in the afternoon and chilly mornings with temperatures hovering around 13°C (55°F).

In this period you will experience short rains throughout these months with average afternoon temperatures about 27°C (81°F).

In this period there is typically less rainfall, though you can still expect some showers, the timing of this dry period varies but falls around this time.

This period is known for long rains with April being the wettest months experiencing regular showers, in these months tracks become slippery and are not easy to navigate. Early mornings have an average temperature of 13°C (55°F).

Dry season in Masai Mara national reserve is experienced from June to October with weather that is perfect for a Kenya safari and it is one of the best times to visit the reserve. In this season you will enjoy warm weather during the day, although there may be a shower or two times and cold weather at night given the varying altitudes of Masai Mara. Visitors will need warm clothes during morning game drives.

In this period there are chances of rain in June but mostly it’s sunny and dry, afternoon temperatures reach 25°C (77°F), however colder weather sets in during the evenings and early morning s when temperatures of around 12°C (54°F) are normal.

In this period it is still dry with a chance of rain on some days, temperatures can get a little warmer in October and hover around 27°C (81°F) and higher but can decrease with rain. Expect chilly early mornings in these months as well.

Masai Mara national reserve’s weather and climate are ideal for safari travels and adventures all year round with average daytime temperatures that are comfortable, evening temperatures can become quiet chilly.

January – February is the dry spell between the short and long rainy season with only an incidental rain shower.

March – May is the long rainy season with April being the wettest month, as a traveler you do not have to worry about raining all day long, but it does rain regularly. During this period, safari trails tend to get a little slippery.

In the period of June – August the average daytime temperature is around 25 degrees Celsius (50 degrees Fahrenheit). Generally it is sunny and dry in this period with only an incidental rain shower.

In this time of the year, occasional rain showers are expected but it is mostly dry. Daytime temperatures in October are slightly higher at 27 degrees Celsius (81 degrees Fahrenheit), it can be slightly cooler after rain.

Early morning game drives in the plains of Masai Mara national reserve can be chilly at around twelve degrees Celsius (54 degrees Fahrenheit).

This time of the year, is the lighter of two rainy seasons in Masai Mara national reserve, in these two months expect short rain showers. Average afternoon temperatures in this period are approximately 27 degrees Celsius (81 degrees Fahrenheit).

Hours of Sunshine Per day in Masai Mara national reserve